Our journey to zero emissions

Our journey to zero emissions

Stopping global warming and stabilising our climate is currently one of the biggest challenges. It’s no longer sufficient to develop business models that reduce environmental harm, instead business models are judged by investors and clients on their contribution to achieving the UN Sustainable Development Goals, such as clean energy and climate action.

Toyota Industries Coorporation (TICO) started this transformational journey over 25 years ago. Toyota Material Handling Europe has a leading role to play in driving change within the industry, the future of which will be carbon-free. Toyota Material Handling has now publicly committed to achieve being carbon-free by 2030 within their own operations.

This zero emissions target is supported by the 2050 Environmental Vision of Toyota Industries Corporation (TICO) and their Sixth Environmental Action Plan, which is an ambitious climate change roadmap. The energy policy also complies with the EU Energy Efficiency Directive, and with the national legislation in several European countries.

As a response to this, Toyota Material Handling Europe has set up an energy policy, which summarises the expectations of its stakeholders, such as customers, owners and regulators. Each with high but different expectations, which are summarised in a clear way in this roadmap for leaders of each Toyota Material Handling entity to follow and adapt their energy strategy within the company.

Toyota Material Handling’s energy policy is based on 3 pillars and targets for 2030: 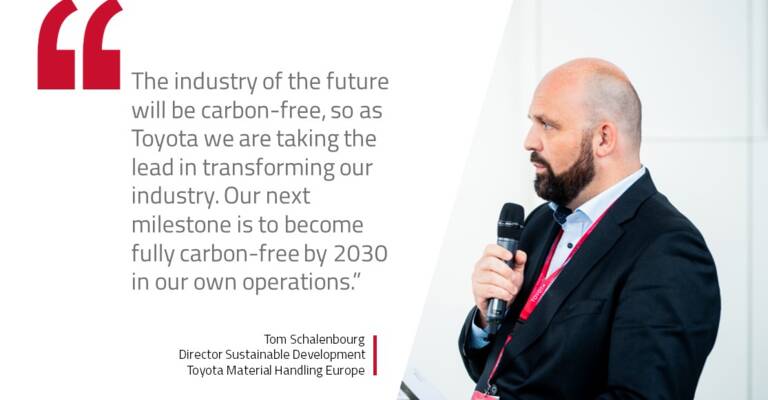 Toyota Material Handling Europe’s goal is to have zero carbon emissions in the entire business by 2050. One of the ways to achieve zero carbon emissions is to get the ISO50001 certification in all European entities. Any ISO system is a formal commitment to implement a continuous improvement approach (Kaizen); in case of ISO50001 the focus is on energy efficiency. Using less energy to produce the same business output helps to reduce cost and creates an opportunity to invest in a faster transition to green energy.

ISO50001 is a management system that starts with an energy audit by external parties, and identifies opportunities such as switching to LED lighting, automation, eco-driving, etc. Each local entity was requested to make a report with priorities, which is the basis for an action plan with projects to achieve the certification based on their energy audit. The projects should be continuously followed up, and policies updated based on this; all according to the PDCA (plan, do, check, act) approach. One example of this can be to apply 5S to service vans and hereby reduce the weight and consequent energy loss. Another example is to move to an A-rated building in order to lower emissions.

There are more ways to reduce energy waste besides ISO50001. One of them that has been successful within Toyota Material Handling Europe is more transparency among entities: by collecting the energy performance from every entity and reporting it on a yearly basis. This empowers companies to look at their own consumption and consider opportunities for improvements. 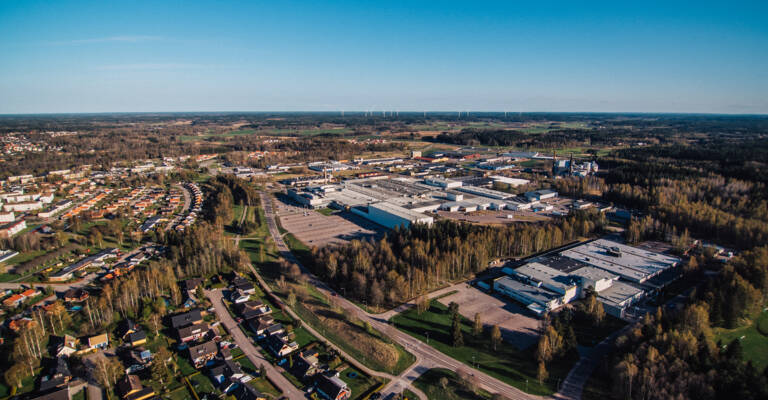 Despite a historic low in oil prices, energy prices may not drop by very much during the crisis caused by the current pandemic. They could even increase, as governments looking for cash and for a green solution to the crisis may increase taxes on energy even further. Unfortunately, for all but a few industries, energy and other climate issues are not as important as other cost drivers, even though businesses need to drive this as a high-priority programme. Within Europe, regulators in each region have their own way of tackling climate change. Northern Europe seems to be taking a lead, by setting up a strong coalition between companies and society to set ambitious sustainability targets that go beyond legal compliance.

Since August 2019, Toyota Material Handling Manufacturing Sweden (based in Mjölby) has been recognised as a carbon-free factory, emitting zero CO2 and using only green electricity, district heating and liquid biogas. This achievement was possible by switching from liquefied petroleum gas (LPG) to liquid biogas (LBG). The Mjölby factory is the first entity within Toyota Material Handling Europe to achieve zero emissions, with hopefully more entities to follow soon. Toyota Industries Corporation (TICO) therefore granted the plant the TICO Group Annual Environmental Excellence Award for their achievement with the project.

The factory’s management team and all employees were also immediately on board to reach their target and had clear expectations for the project, strongly believing in the positive results. This resulted in a smooth project that required only some technical adjustments to run the painting areas on biogas.

We’re happy with the result, but we should continue to put in our efforts, and try to continuously do better (Kaizen), in terms of energy efficiency, but also transportation, and many more aspects. 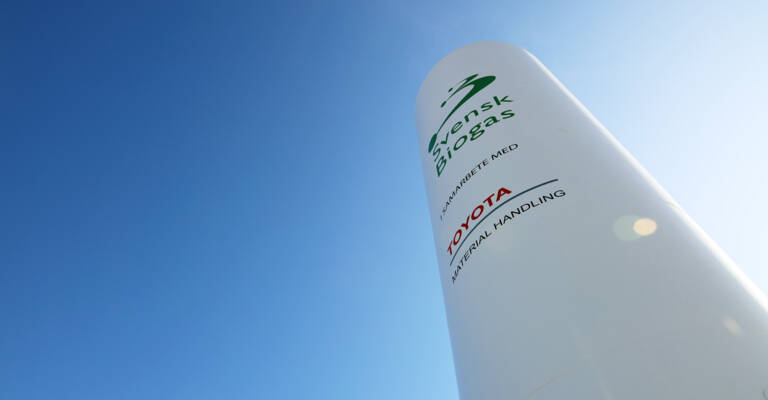 The factory in Mjölby also plans to achieve the ISO50001 certification by the end of the year. This will require an extensive mapping of how the plant can save even more on energy in other aspects. They will have to determine which changes can have the most impact, which actions should be taken next, and set some clear and specific goals.

Another project the Swedish factory has been investing in is the installation of solar panels on the roof of the building. Even though this won’t contribute as much to being carbon-free as the switch to biogas, since they already use green electricity, it’s a way for them to buy less electricity.

Like many other investments, going for zero emissions was a big gain both for the environment but also for the company. “It was a big project but not impossible to implement, and it actually went very smoothly. We are one of the first companies in Sweden using liquid biogas in this way, and by showing how it can be used to run a big factory, we hope that we can set a good example for other companies as well,” says Maria.

As in most businesses committed to address climate change, our challenge is that only a small part of our emissions are under our direct control. The other 80% comes from the use of our equipment, and 15% from our suppliers' operations. By encouraging suppliers, customers and all other stakeholders to switch to green electricity we can start to drive our biggest emissions down. By achieving zero emissions in our Swedish factory, we aim to lead by example.

The next crucial step change for Toyota Material Handling is to action and embed their new energy policy. With strong commitment and engagement with all employees, this can become a reality. The biggest challenge remains to be completely transparent throughout the supply chain about all aspects regarding energy, and to optimise the energy efficiency of customers’ equipment use as a next step.

Tom Schalenbourg is a member of the HR organisation and drives the companies’ sustainability strategy since 2012. Major milestones include our annual sustainability report with targets for each business function and a significant reduction in emissions.