Throughout the years, the Toyota Material Handling factory in Sweden (TMHMS) had to increase the production of their forklift trucks significantly to meet demand. Today more than 80,000 electric forklifts are built a year. To enable this expansion, we introduced more and more automation in production and logistics over the years. 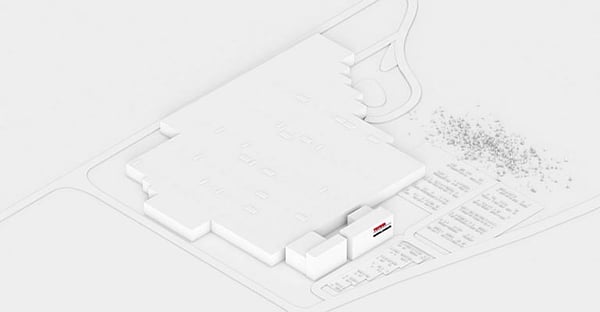 The more than hundred industrial robots working in the factory’s welding and painting processes have contributed a big portion to the productivity increase. But as more material needed to be moved around to keep up with production, traffic increased and a need for more efficiency followed. As a next step, we optimised the goods flow and installed automated vehicles. We also retrained forklift operators to do value-adding work at the production lines.

Toyota’s kaizen philosophy is to work with small but continuous improvements and not expect to be able to change everything right away. If you want to automate everything at once, it will become too complex. Therefore, we handled the automation of the flows in the factory in steps the past few years.

The first step was to automate the flow from the parts area to the assembly lines. Before, the goods were handled pallet by pallet with reach trucks. But to keep up with production and create a safer work environment, these forklifts were  replaced in 2013 by manual tow trains that transported 14-16 pallets at the same time. By starting with manual trains, we learned more about the flows and how often the trains needed to leave. Three years later, we replaced these trains by fully automated TAE500 tow trains leaving on fixed intervals to replenish the different forklift production lines, increasing safety and creating a continuous flow.

Before October 2017, returning empty kit carriers along the mast assembly line was done manually. A person brought material back and forth to the assembly line, a very repetitive and monotonous task. To reduce this non-value-added work, we started a project to look into automating the movement of the kit carriers. After standardising the process to make automation of the flow easier, an automated cart was chosen for the job as it allowed for quick implementation and high flexibility. Nowadays 2 compact automated carts TAE050 take care of this repetitive pick-up and drop-off of kit carriers, allowing the worker to do more value-added work now.


Automation of replenishment to welding area

Learning from the first automation step with the implementation of automated tow trains in production, we also investigated the welding area in 2017 before implementing AGVs. This to ensure the people, environment and timings were suitable to introduce automated transport. Since 2019, components are brought to the welding shop with an automated TAE500 tow tractor, which runs on a set schedule. The result is a more leveled flow and safer work environment. 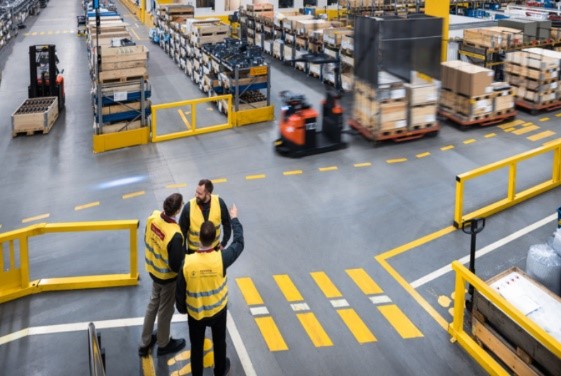 All incoming goods are moved from the inbound area to a raw material buffer before being transported to production. Before, this was handled by 6 manual reach trucks, covering some 5500 locations. To cope with the increasing demand for material by the production output from the raw material, storage had to increase.  Here we opted to let AGVs take over the work and relocate the workers to other areas, for example depalletisation stations in the inbound area. By first standardising the process as much as possible, the risks and cost for the automation project were kept to a minimum. Since early 2020, 10 automated SAE stacker trucks have taken over in the goods receiving area. They pick up the pallets from the conveyors, bringing them to a storage area. Some functions such as automated label scanning and order initiation were added to the conveyor system to ensure safe transportation of the pallets. 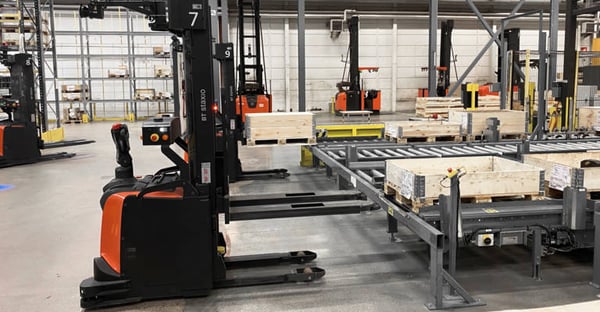 Toyota develops and builds its own automated vehicles. By using our own proven automated solutions at our sites, we have the benefit to learn and make continuous improvements.

More automation steps are planned in the coming years, such as more automated carts next to the production lines and automated tow trains between the paint shop and assembly. The benefits are clear: step-by-step automation gives you the opportunity to learn and adjust. It will also bring you the efficiency, reduction in waste and level of safety you need to stay competitive.

People, a key factor to make your automation project a ...